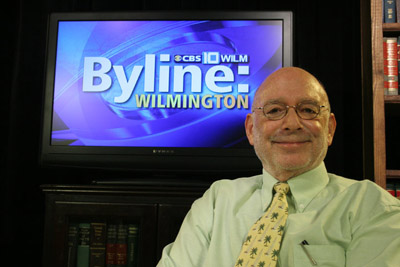 Donn Ansell was a prominent member of the overall theatrical family of Wilmington. Having attended The American Academy of Dramatic Arts in New York City as well as graduating college at Princeton University. Mr. Ansell began working for CBS in 1961 as an office page; a job that would see him promoted in years to come as “clap-man” for “The Ed Sullivan Show.” With an obsessive work ethic and drive as well as attention to detail Mr. Ansell became executive producer of such well known television shows as “Captain Kangaroo”, “Secret Storm”, and “Candid Camera” as well as appearing in a number of off-Broadway plays; “Nerve endings” being the most well-known of these plays. Having started semi-retirement in Wilmington, Mr. Ansell became known to all theatergoers when he was first cast in the musical 1776. From there he would perform, produce or direct a string of successful plays and musicals in the Wilmington area as well as becoming a major part of “Curtain Call”, Wilmington’s first touring Theater Company. As the first Managing Director of the Thalian Association, Mr. Ansell would help solidify Thalian Association as a viable and successful theater force. Retiring from theater in 1983, Mr. Ansell would begin a successful career in radio with the ground breaking “Talk of the Town” broadcast on WAAV. However, Mr. Ansell’s retirement from theater would be short lived and he would soon reemerge in the early 1990’s starring in a string of successful theatrical productions; having played Ebenezer Scrooge in Wilmington’s landmark production of Frank Trimble’s “Ebenezer” as well as Willy Loman in “Death of a Salesman”, to name a few. It was then that Mr. Ansell’s passion to champion and save the Community Arts Center of Wilmington from imminent destruction began and the Community Arts Center Accord was founded. After ten long years, the mission of the Community Arts Accord with the help of Mr. Ansell and many others would be accomplished when the Community Arts Center was preserved for the residents of Wilmington and renamed The Hannah Block Historic USO/Community Arts Center. Donn Ansell’s never-ending love for his community does not stop with The Thalian Association or The Community Arts Center. Mr. Ansell’s love for Thalian Hall was boundless and he proudly sat on the board of trustees for many years. Therefore, in memory of Donn Ansell, his achievements in local theater as well as his achievements in radio and television media and his overall passion for Wilmington, Thalian Association Community Theatre will present a yearly scholarship to a deserving, college bound student who plans to major in theater, film, or journalism. For more information about the scholarship fund or to make a contribution please call Susan Habas.

DONN ANSELL SCHOLARSHIP IN THEATRE ARTS The Donn Ansell Scholarship in Theatre Arts is administered annually by Thalian Association Community Theatre (TACT). The scholarship will be awarded each year to a young person entering college and who majors in any of the following programs at a major state supported or private institution for higher learning: theater, cinema or journalism. Applicants must have been active with Thalian Association Community Theatre and/or the Youth Theatre as performers, designers, or technicians. Performers are encouraged to have worked in a backstage capacity as well. Applications for the scholarship are available August 1 to rising seniors who will graduate from high school the following year. The deadline for applications is March 1st of the year of graduation. Applications must be accompanied by letters of recommendation from applicants’ high school music, dance, drama and/or technical theater teachers, if their respective school offers such programs; their guidance counselor; and two directors with whom the applicant has worked. The directors should attest to the applicant’s responsibility, work ethic, talents, dedication and potential. Applicants must submit school report cards from the previous two years (10th and 11th grades). Applicants are also asked to submit a 500 word essay about the impact of theatre arts and the importance of mentors like Donn Ansell. Early application is encouraged so that the selection panel may familiarize themselves with the applicants over time. Applicants shall keep TACT appraised of their theatrical endeavors subsequent to the date of their application so that TACT may have the opportunity to see their work. Applicants must have accepted placement in a college, university or training program by May 2022. The scholarship recipient will be announced in June 2022 at the Thalian Association Community Theatre Annual Meeting with the presentation at the Thalian Awards Ceremony in July 2022. TACT reserves the right to withhold the scholarship if, in the panel’s opinion, no deserving applicant is recognized. The amount of the scholarship shall be  determined annually by Thalian Association Community Theatre.